Place holder
Posted by MTengr at 23:02 No comments:

On the lineup for 1800 Grain Train tomorrow
Posted by MTengr at 00:36 No comments:

I've been busy with the RR Safety Committee... I swear, I'd rather just run the train.

A few days ago I did go for a short motorcycle ride to relax... winter took a break and it was in the mid 50's.
I'll be adding 3 more states to my motorcyle's journeys this year. Mississippi, Oklahoma and Texas. I had originally hoped to ride to Nova Scotia but I'll be in Iowa instead for the famous ST1100 28amp to 40amp alternator upgrade. Then continue to WeSTOC. For a map click here.

At any rate a few new RR photos are available in the Train Trip 2008 galley at Smugmug
Posted by MTengr at 11:45 No comments:

photos later
Posted by MTengr at 20:09 No comments:

We died again... for those unfamilar with the term, it means we ran out of time on the 12 hours allowed by federal law. Called for the LM, we had the MRL4303, MRL4313 and the MRL703... It took more than 2 hours to get out of Laurel... and over 2 hours at Livingston setting out the MRL703, setting out 6 cars, picking up 19 cars and waiting for the helpers. We were 9107 tons out of Livingston. At Belgrade the signal department was working on the automatic gates and we had to flag our way across all 4 of them. Siding at Logan for 3 trains... so dying at Toston wasn't really annoying except we ended p in the van in baad weather again. It's snowing again in Montana.

Thursday were called for 0230 on the LM. It took 3 1/2 hours to get out of Laurel. Then waited for helpers for quite a while in Livingston. The dispatcher intended to relieve us at Winston when it became obvious we would not make it to Helena on our 12 hours. Then we went in the siding at Clarkston for a poor meet and again at Lombard for nearly an hour. After a train ahead of us stalled on the hill we parked our train at Toston and ended up in the van again. Unavoidable... I think the train stalled because of blowing drifting snow.

A total 12:55 on duty. Too tired to even stop to eat we went right to the hotel in Helena and I went right to bed. Awake again at 8pm I went to get something to eat and was up half the night. About the time I needed to go to sleep again and had just fallen asleep again, we were called at 0510 for the PASKCK. A nice little 57 car solo train, we had a good trip to Laurel, only to get held at Rapids for lite power, then Spurling and 5th ave. Laurel for 2 hours. There had been a little derailment in the yard last night. The yardmaster gave up and took us off the train. Tied up at 1500 after 9:50 on duty. I had been up from 8pm until 3pm and from 00:30 until 4pm the day before. I went home and went right to bed... so 2 days wasted. I don't make new years resolutions but I have been trying to get one thing done each day (besides railroading).

Now as I write this I am somewhat rested but need to get some more sleep. The timing is all wrong. When I went to bed the lineup said 0900 this A.M. Now the lineup says 1830 this next afternoon. I'll try to stay up a while and sleep in in the morning so that I can tolerate another all nighter.

Update: I am called for 1545... that gave me 24:45 off and we will chase down a crew on the train that we will run to Helena today. The crew will be short on time... so we will take over for them somewhere along the line.
Posted by MTengr at 00:28 No comments:

Winter has caused me to hole up lately. I'm either inside the locomotive or in the car or in the house. Today I left the house for the first time in a while, did lunch with the wife, a little shopping a erand running. I'm trying to do one productive thing everyday. It doesn't sound hard but when all you are trying to do is catch up on rest... well it ain't easy. I did play tennis at the college tonight.

My little Asus laptop is now fully functional and legal to use at work in lieu of rulebooks thanks to Dave P at WashCorp IT. I called him today and I had the files in amatter of minutes. I figured the were PDF before they were repligo files.... at any rate it flys! He sent me all the PDF documents I needed so now I don't have to carry all 14lbs of books any longer. I'll just carry the laptop and a Timetable (although I have a PDF version of it too) I carry a HAZMAT book in my repair bag alog with a hazmat hood.

Guys lay off in droves prior to the Super Bowl, they dream up any lame excuse to be off for the football game... some of them risk being AWOL and are evidently willing to risk discipline for being unavailable. The crew office has a heck of a time dealing with the absences. Right now there are quite a few guys layed off that were denied... of course it's the same guys as usual. How do they get away with it?

Here's an idea, as far as I know, MRL is the only railroad that pays-time-and-a-half on holidays.... make Super Bowl Sunday a paid holiday.
Posted by MTengr at 10:29 No comments: 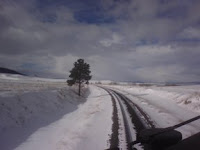 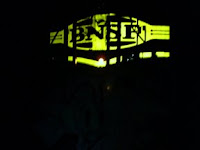 Right: I attempted to take a camera phone picture of all the snow on the front of the engine while we were at Lombard.
Posted by MTengr at 13:38 No comments: