is America still out there? - It's Black Friday -

It's Black Friday.  I have not posted in a while. I'm retired now so there isn't much RR stuff. I will post some old RR pics at some point, but, for now...

I had been avoiding the whole spectacle of the election.  Made me want to vent here. Whole thing turned my stomach.  I had to avoid it a bit as it would cloud my happiness. Not intending this to be a political rant or some leftist blog but this whole greed thing it outta hand.

I picked today to write because I have been recently encouraged to relate some stories of my motorcycle journeys with print and photographs. Also, over 100 Wal Mart stores have been picketed by non-Union workers today.

This is a two fold story about a motorcycle journey and Wal Mart.  The town of realization became Wellsville, MO. (Zoom in and see the vacant lot where the flags were)

The date was June 19, 2008. Actually there will be another America's Still Out There story that happened on this same motorcycle trip.  It involves a Horse and Buggy and a Soda Fountain and a Barbershop. I'll relate that soon and link it to here.

The downtown area was all but dried up. Just one lone skateboarder (no one to run him off) a bunch of boarded up buildings, a information booth in the form of a caboose and a town square with over 4400 American flags planted to honor or dead in Iraq. Stopped for some reason long forgotten... probably to honor the dead.

The skater kid comes over to admire the motorcycle.  That still happens in backroads of America. Strangers are still approachable.  I stuck me that Downtown Wellsville had probably dried up because of Wal Mart.  So I asked the kid,  "is there was a Wal Mart in town"?  Sure the kid says, "over in Mexico" ((18 miles away).... suspicion confirmed.  I had been running into this in town after town. Reminder to self... take pictures of the kids.  All the pictures from this trip are available here

Now, do we blame Wal Mart or ourselves or was it just all inevitable?  Hard to say... perhaps "Pay less, Live better" works.  I admit I have been in Wal Mart a few times.  But I would rather find those hard to find eye drops in a Mom in Pop Drugstore that was right behind that motorcycle pictured above.  Or get a battery at the Farm Equipment store.  That used to be the way of things. Life was slower, better and more personal.

How can you not like this guy? Would his store exist today? 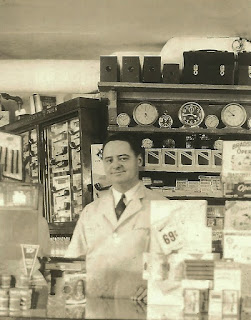 It's Maggie's Uncle Harold.  She has fond memories of his Drugstore and Soda fountain in Detroit and the penny candy and Grape Nehi... America's Still out there