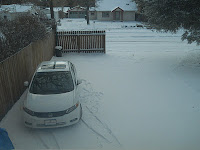 RR: Looked at the lineup and stood for a deadhead at 10am but it was already past 8. Called the crew caller and let him know I was willing to deadhead BY TRAIN ONLY. The roads are way too slick to deadhead by crew van. Now I'm on the lineup for 1600 Coal load. They do listen? Who knew.

Tried to fire up the new snow blower... it would not start. Diagnosed it as old gas. Draining it now while I post this. Piss poor design... impossible to get to the air inlet... there is no air cleaner! There was one bolt behind a welded bracket. The engine would have to be removed to get to it. Bent the bracket - hey it isn't an airplane so what.

Update: As I left to go to work I noticed the snowplow had buried the sidewalk again.... grrrr

RR update: under 10 hours on a Coal load in 3F weather... pretty much unheard of and surprising cause the power looked like junk. Heat did not keep up... we were wearing 2 coats and 2 sweatshirts and the winter gloves that my coneheaded boss gave me. Also the fridge didn't work... had to ask for ice and it was 3F outside.
Posted by MTengr at 09:40 No comments: