Will the thrill - atgatt 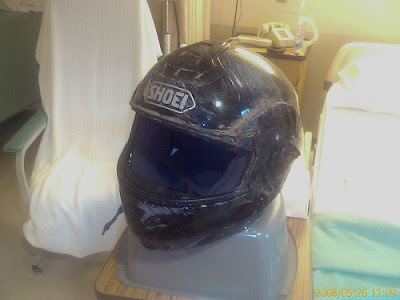 The Motorcycle group I am with have a saying... atgatt... All the gear all the time
This is why. It can happen so quick. Riding in the rain the bike hydroplaned and dumped Will off on his left side. He was doing 75 mph and came out of it all just very sore but no major injuries and no head injury. He still is a cerebral guy. And a friend... whew!
Posted by MTengr at 04:28 1 comment: 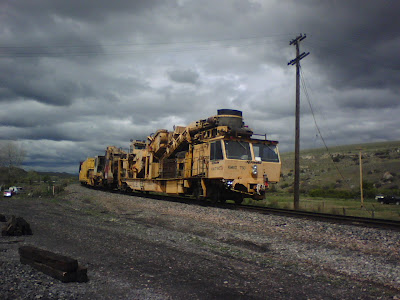 An undercutter isn't a big weed whacker... it actually recycles ballast and lowers the track ie. in a tunnel to allow larger equipment to pass through. As RR equipment has gotten bigger more room is needed. Most tunnels are lined with concrete and it is cost prohibitive to enlarge the openings.
Posted by MTengr at 15:54 No comments: 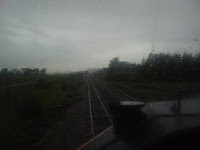 I'm in the siding a Greycliff on a 17000+ Coal train using the KOA campground connection...
Posted by MTengr at 19:41 No comments:

RR - Careful what you wish for

I had never had the opportunity to br qualified for DP's by a roadforman... I finally just talked my way into it. Careful what you wish for. Yesterday I had a Coal mty that had DP problems not covered in the guides (imagine that) The DP's would drop out of normal and go to idle... I could feel the train run out then about 40 seconds later, an alarm light and indication of idle and DP brake valve cut out. Executing normal would get it to load but the brake valve would stay cut out and did not reset until stopping and running the train check. It wasn't a problem really on a Coal mty but I sure as hell don't want this setup on a load.

I love the DP's on a Coal Load

photo above... retired Engineer Goodson in the middle 11/07

No worries!
Posted by MTengr at 10:39 No comments: