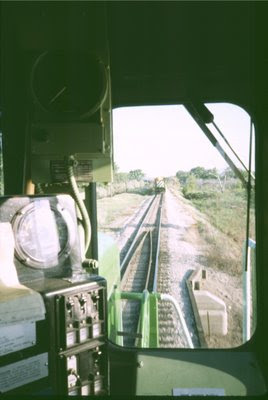 Tomorrow it will no longer be legal for me to use my camera on a moving train. I've removed my movies from You Tube and will not be posting new photos taken from the cab unless I am stopped and other duties permit. So obviously I'll only be able to take movies from the cab if I'm deadheading by train in the rear units. It happens but not often.

The picture above was taken near Northport, NE sometime in the early '80's and no, I'm not moving. The Helpers are getting on my point in preparation of pulling Angora hill toward Alliance. Notice the cable driven Barco speed recorder and the "Flimsys" Click the photo to enlarge.

I seldom have an original thought but it occurred to me after looking at Martin Burwash's blog that I should post some of my old scanned photos as I near retirement. I'll do a career blog here soon... in the meantime...