I'm tapering off and backing up

I think the language used in the media is against the rules to be used on the senate floor but has become popular there too. It is a disgrace. The founding fathers had spirited discussions but established decorum for a reason. It got out of hand. We have seen it surface a few times recently as the aisle has been more divided. We need more gentlemanly behavior from our leaders. Has it gone to fist like Japan yet? Won't be long I predict.

Personal attacks are wrong there just as they are wrong on this forum. Tell me if I'm full of shit... it'll be OK

It doesn't take much time listening to Rush or Glenn to figure out that they are first and foremost entertainers who are in it for the money, fame or whatever. The outlandish statements they make prohibit me from taking anything they say seriously. I therefore find it humorous. At least the leftist guys are on the comedy channel for the most part. Rachel has her own agenda and I find her funny too. I admittedly would rather laugh with them than at them but what I think of them doesn't matter. I also laugh at them that take them seriously.

And personally, and I know it is a contraction, but I respect the office if not the individual. A am disillusioned with most if not all politicians but refrain from using derogatory terms even though I could not stand Mr. Bush and am rapidly feeling the same about Mr. Obama.

It is impossible to find out or know what really goes on with our government. I was dismayed to learn that the Coast Guard prevented news agencies from taking pictures as the oil hits the beaches along the Gulf. Transparency in our new administration? Bullshit. 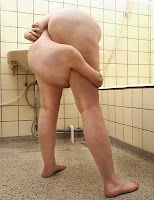 Lately, I have gone burying my head in the sand. If I don't I tend to get wrapped up in the disgust and it can actually affect my mood. I believe in equal opportunity and they are all pissing me off with regularity. I don't watch TV news much, it disgusts me. I just grab my ankles and hang on no matter what they cram down our throats or shove... wherever... you get the point.
Posted by MTengr at 00:00 No comments: 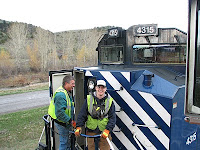 I'll be eligible to retire in exactly 2 years today. After that I will no longer get to run the train.

Photo of Helper crew at Bozeman
Posted by MTengr at 14:10 No comments: