Another installment of "America's Still Out There" 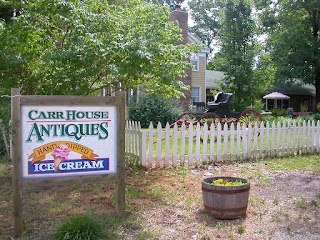 I had planned on riding the "Great River Road".  I have had rerouting because of flooding all trip.  John and I upgraded the alternator and went for a ride the day after.  We were turned account high water a few times.  This is the next day. I give up and head away from the Mississippi River at Hannibal. It's hot, humid and so very green.  I miss the green as it's already brown in Montana.  Missouri has had so much rain it is really really green.  The hazard of dodging the mowing machines on the shoulder of the county roads is there.  I blast along and spot a buckboard... missed the pic a bit.  Wait, a buggy in the front yard caught my eye... then a sign... "Hand Dipped Ice Cream"  I jam on the brakes.  Circle around and park in the side yard I discover the classic old farmhouse has a addition.  Turns out the old boy has bought the old soda fountain from when the drugstore went out of business (Yes, there is a WalMart nearby)

Now I like Ice Cream but not a lot at a time.  I ask for just one scoop.  I get three scoops in a milkshake glass.  Buck and a half. This would be $4.50 in California. I head outside into the shade to the patio table.  The owner follows me out.  Is it the classic glass I have?  I don't think so.... he lights up a cigar... nice... downwind... nicer.  We talk (imagine that)  I ask him what he did before he got into the tourist business.  He was a barber for 40 years. I say, I usually get a close haircut before I ride on these trips.  I'd give $10 for a haircut.  I get no change in expression.  I manage to choke down all the ice cream.  I stand up and start getting ready to leave when he asks if I want a haircut or not.  Cool.  I'm not sure if he's really set up for it when he pushes the shrubbery aside to reveal a tiny barbershop on the very back of the building. Can you see the barber pole? 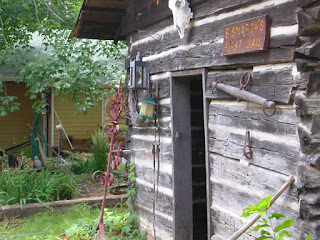 Now, if you have never had an old style haircut and shave... straight razor, lather, scalp massage, toilet water... the works.  I understand the girls and the spa thing now.  Refreshed, get ready to leave.  I give him $10.  He gives me $2 back.  I try to not take it.  He's says, "Haircuts are eight dollars."  I say, "Then two dollars are a tip"  He stuffs the two dollars in my hand and says, "Haircuts are eight dollars"

You should meet my sister

Another installment of "America's Still Out There"

This is a two parter.

Last night we left Memphis headed toward Taos. We found a nice campground in Arkansas at the bottom of a rain slicked dirt road in to the Steele Creek Campground.  Leave it to Dan to lead me down a muddy road. The next morning we packed up and left in the rain looking to find a place for breakfast.  A General Store looking place looking promising.  This was all near Dogpatch Arkansas... seriously. Steve parked on the porch out of the rain and we went in.  We sat there for some time before a Grandma looking old gal came over to take her order.  I began to realize she may have overheard my story about how my grandma was raised up in this area.  She asks, "Can we hep yew?" Danny, "Some menus?" She stares at me for a tiny bit, then I get it, they don't have menus...so I say to Danny, "It's breakfast... order breakfast food... it she doesn't have it, she'll tell you"  I had eggs and grits and a small chicken fried steak... homemade bread toast.. marvelous. 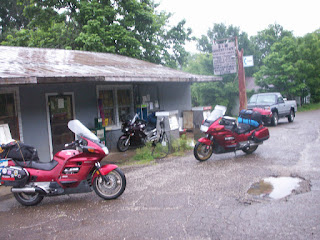 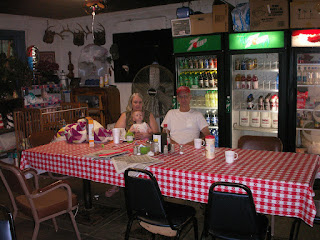 Riding on toward Taos we end up pressing into OKeene, Oklahoma. I's getting dark.  Dan is telling me there are two motels.  I'm looking at my paper map.  Doesn't look like much of a town to me.  We ride by the city park - NO CAMPING

Dan rides around and around and around the parking lot of the old folks home.  I finally realize this was once a motel.  We ride over to the other motel.  It's boarded up.  Literally. Looks like the little store is open.  We roll up and go inside.  One lone girl working and one other customer.  Beth is just cleaning up... looks like she is closing.  I ask if there is somewhere we can get something to eat.  She seems more than happy to drag it all out again and fix us some deli style sandwiches.  Small town, not much to do. Now, I don't know when to say this but Beth is maybe one of the most stunning young ladies I have ever laid eyes on.  And so sweet.  I ask her if she knows where we might camp for the night, explaining that we saw the no camping sign at the City Park.  She tells us that Keith Richards is going to check on her when she closes up.  She suggest we ask him as he is the Constable.  After a bit Keith shows up and we find out he actually works for the water department and is only aux. police and doesn't really have authority to tell is it's OK to camp out in the park.  He does however reveal that he usually locks the bathrooms over at the park but tonight he's going to forget.  And he also says that sometimes people camp over by the airport at the back of the park by the basketball court.  He says no one sees them over there. 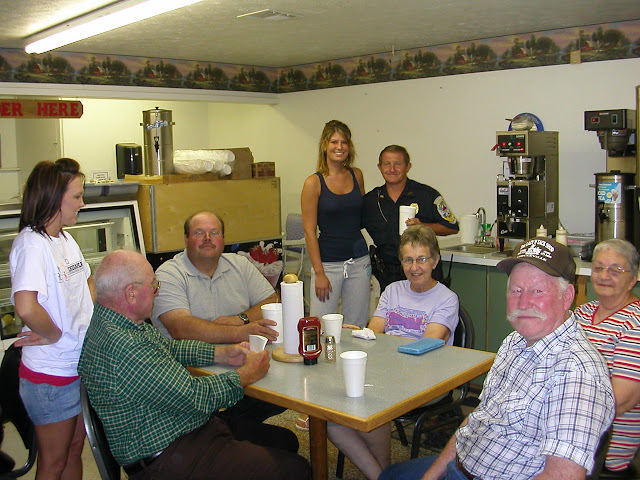 The next morning we rise and shine and head for the store for breakfast.  The whole town is there.
The owner is far left.  The Mayor is the balding guy.  Beth (I think you can figure out) Keith is still on duty.

As we pay the bill I cannot help but telling Beth I think she is so pretty and sooo nice.  And now... here is what made me love her.  She says, "You think, I'm pretty, you should meet my sister"

All the pictures from this trip at Smugmug
Maps etc.

America's Still Out There 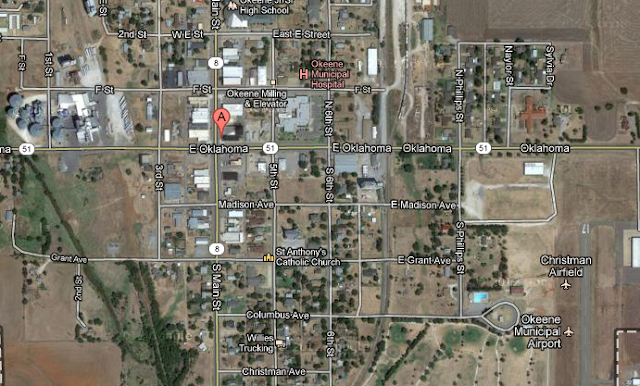